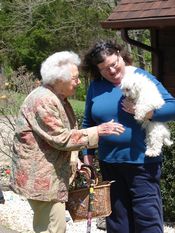 As Christians, Presbyterians believe that there are some unique claims which we can make about the nature of humankind. But, these claims are not in any way a substitute for what we can learn about ourselves from all the various sciences which study human nature and behavior. A physician, sociologist, or psychiatrist can obviously tell us very important things about ourselves which a theologian cannot. What Presbyterians have to say about humankind does not replace all the essential information which the various sciences give us. Rather, Presbyterians try to get behind all the scientific claims about human nature. We try to answer the question, “what does it mean to be a human being?”

We believe that in entering into the life and history of humanity, God reveals not only Who He is, but also who we are. Our faith adds a dimension to our self-understanding which we cannot find anywhere else except in God. Accordingly, we learn that there is a difference between what humanity is and what humanity ought to be. What we are is sin, and what we ought to be—what we were created to be—is the image of God.

What is the image of God?

“God created humankind in His image; in the image of God, He created them; male and female He created them” (Genesis 1:27). This passage from the Bible is not referring to a physical image shared by God and humanity. Presbyterians do not believe that we can look through a room full of people and claim that one might look more like God than the others.

By looking at the Biblical passage, we see that God is not creating each individual human being in His image. Rather God creates the whole of humanity in His image. The fullness of the image of God is thus expressed corporately and communally.

Presbyterians believe that we cannot be truly human by ourselves. No one can live as a human being created in the image of God independently and self-sufficiently. We believe that we are fully human only when we live in relationship with God and in community with one another.

What is original sin?

“Original sin” is the doctrine that the original sin of the first human beings has detrimentally changed the nature of all of humankind. In the Scriptures, we read that the first humans effectively decided that they were not content being humans who lived in relationship with God. They preferred instead to be like God—wanting to claim for themselves what is right and wrong; what is good and evil. They wanted to have a righteousness of their own rather than derive their righteousness from their relationship with God. They wanted a righteousness of their own rather than one derived from the image of God. (Genesis 3)