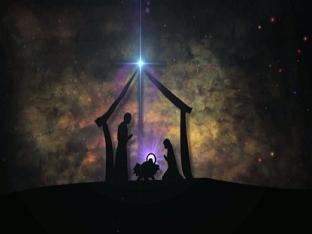 The word “incarnation” comes from the Latin word incarnatio, which means “enfleshment,” (from in, “in” + carnis, “flesh” or “meat”). It refers to the bodily manifestation of an abstract or non-physical quality. Specifically, it refers to the entry of divinity into human form and life. From a Christian perspective, incarnation refers to the doctrine that the pre-existent Son of God (the second Person of the Trinity) became a human being in the person of Jesus of Nazareth.

Is the incarnation mentioned in the Bible?

The word “incarnation” does not occur in the Bible. But Christians did not simply invent this doctrine. The essential affirmations of the doctrine of the incarnation are rooted in the Scriptures.

The Word became flesh and lived among us, and we have seen His glory, the glory as of a Father’s only Son, full of grace and truth.   (John 1:14)

In subsequent verses, this “Word made flesh” is identified as Jesus Christ (John 1:16-18).

The Gospels of Matthew and Luke both witness that the Son of God entered into the created world by birth as an infant, Jesus of Nazareth. According to these Gospels—as affirmed in the Apostle’s Creed—Jesus was “conceived by the power of the Holy Spirit and born of the virgin Mary.”

Is the Holy Spirit the father of Jesus?

When Scripture witnesses to Jesus being “conceived by the power of the Holy Spirit,” it is not claiming that the Spirit is the father of Jesus. This phrase is not meant to be a biological explanation—it is not trying to explain the birth of Jesus as a kind of intercourse between the human Mary and the holy God. Presbyterians, like other Christians, believe that being conceived by the power of the Holy Spirit emphasizes that the Word became flesh not by biological processes but purely by the will and word of God. The incarnation of God in Jesus Christ is analogous to the creation itself when God simply spoke and it was done.

What role does the virgin birth play in the incarnation?

Likewise, we Presbyterians do not believe that the doctrine of the virgin birth is meant to imply that Jesus is a half-breed—that He is neither wholly one of us nor wholly God in our midst.

Is Jesus half God and half human?

Presbyterians do not believe that the incarnation means that Jesus is half God and half human. Nowhere in the Scriptures is there a claim that Jesus is some kind of superhuman semi-god—that He is a combination or mixture neither quite human nor quite divine.

Another misunderstanding of the doctrine of incarnation is that Jesus is divine but that He only “seemed” to be a human being—that He is God disguised as a man. This misunderstanding is called “docetism,” from the Greek verb dokeo which means “to seem.” Docetism asserts that Jesus’ human nature is only a mask which conceals His divine self. According to this doctrine, Jesus is a divine being who is not subject to all the limitations and problems of human existence. Eventually, docetism was rejected by the church.

Presbyterians believe that the incarnation means that Jesus is completely human in all aspects of His life. In the Scriptures, Jesus’ humanity is evident. He grew in wisdom and stature; He hungered; He had thirst; He was tempted to sin; He even suffered and died. With the exception of sin, Jesus is just as human as the rest of us.

Presbyterians believe that the incarnation means that Jesus is completely divine. He is not just a prophet or a moral hero—He is not just a very godly person. In the Scriptures, Jesus’ divinity is evident. He exists with God the Father from the very beginning; He reigns eternally with the Father; He is “Emmanuel” (God with us); He is the unique presence of God in the world. Jesus is just as divine as God the Father.

The tendency to distinguish between the human and divine natures of Jesus Christ lends itself to yet another misunderstanding of the doctrine of the incarnation—that the two natures are of such a distinction that Christ is really two persons. This misunderstanding implies that the human nature dwells in the person of Jesus the son of David and that the divine nature dwells in the person of Christ the Son of God—that these two persons act with such harmony that they only seem to be one person. This misunderstanding was officially rejected by the church at the council of Chalcedon in 451 AD.

Presbyterians do not believe that the incarnation means that Jesus is two persons who only appear to function as one. We believe that Jesus has two distinguishable, yet inseparable natures. These two natures are not separated one from the other in two persons. Rather, Jesus is one person who is both God and human. Like other Christians, Presbyterians concur with the Definition of Faith as established at the Council of Chalcedon in 451 AD.

The one and the same Christ, Son, Lord, Only Begotten, is made known in two natures, without confusion, without change, without division, without separation. The difference of the natures is not destroyed because of the union, but on the contrary, the character of each nature is preserved and comes together in one person—not parted or divided into two persons, but one and the same Son and only-begotten God, divine Logos, the Lord Jesus Christ.   (The Chalcedonian Definition)

Why is the doctrine of the incarnation so important?

As Christians, Presbyterians reaffirm the Chalcedonian Definition as a statement of faith about Jesus Christ. We recognize that we would be without hope if Jesus were either only human or only divine. Because Jesus is both divine and human, we have confidence that God does not stand at a distance from us, but has entered into existence with us. Because Jesus is not God in a mere human disguise, but is fully human as well as divine, we have confidence that God truly understands us and loves us.

The apostle Paul writes that Jesus Christ, “though He was in the form of God, did not regard equality with God as something to be exploited, but emptied Himself, taking the form of a slave, being born in human likeness, being found in human form” (Philippians 2:6-7).

Presbyterians believe that the two natures of Jesus allow us to affirm two very important aspects of our relationship with God. The first aspect is that, in the person of Jesus Christ, God has exalted humanity. God did not make Himself known to us as an angel or as a superhuman spirit, but as a human being. In so doing, God places a divine stamp of approval on human life. In Christ, God is showing us that our humanity is not something from which we must escape. Rather, God shows us that our humanity is a divine gift—a gift which we are to share with God and with each other—a gift for which we are to live lives of gratitude.

The second aspect is that, in the person of Jesus, God has humbled Himself. God does not consider His goodness and holiness as barriers to fellowship with humankind. God is not a prisoner of His own spirituality, but is able to be God even in a non-spiritual realm. God can accomplish His will in weakness as well as in strength. God can accomplish His will by sacrificing Himself as well as by asserting Himself. And this is precisely what God accomplishes in Jesus Christ.