WATERS OF THE LIVING LORD

Through our experience with Living Waters for the World (LWW) we have been challenged to meet the needs of communities with the need for safe drinking water that could not easily be met with the standard equipment systems endorsed by LWW.

The first such community we worked in is an orphanage for boys in the city of El Progresso, Honduras named Pro Nino.  This orphanage is home to 70-90 boys ranging in age from 4 years old to their teens. 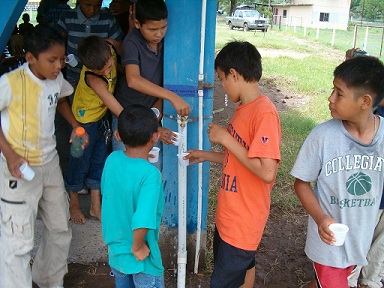 The standard LWW system is designed to fill 5 gallon bottles for distribution, requires an operator and uses electricity.  The orphanage at Pro Nino had electricity but no funds for an operator and they required running water (at taps) at 4 separate locations to serve dormitories and the kitchen.

We designed a simple system working with established vendors to meet the unique needs of this community.  Since we did not use LWW equipment we were advised that we could not continue to use the name Living Waters for the World for the name of this mission.  We sought and received permission from LWW to use all of the health and hygiene training materials that have been instrumental to the success of our earlier installations.  We renamed our mission that uses this type of equipment design Waters for the Living Lord. 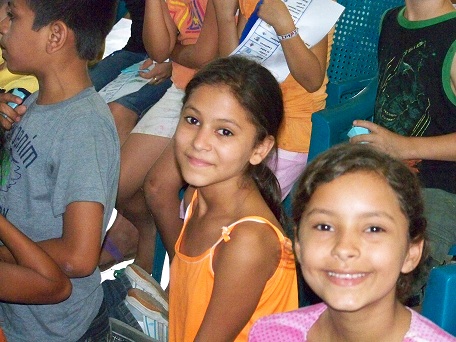 Our second installation was in the mountain village of Concordia, Honduras.  Since electricity is unreliable and water pressure is always available (via an elevated cistern tank) we redesigned the system so that it uses no electricity.

With the continued strong support from our church we have gone on to perform 7 additional installations in Hondras. In 2011 we installed a system in the mountain village of Concepcion.  In 2012 we installed systems in San Jose, San Antonio, Nueva Jalapa and El Pinal.  All of these villages are small towns in the Department (State) of Santa Barbara.  In 2013 we

installed our first system in a village that had no electricity at all!   This was at Rio Blanco. It is a very remote place.  In 2013, we installed a system for a second orphanage in Honduras.  Las Casitas is a girl's orphanage in San Pedro Sula.  San Pedro Sula is one of the two largest cities in Honduras.  It is in a hot, flat, valley.  We partnered with Sparrow Missions who completely renovated the water supply system. They put in a new well, new piping to the showers and new bathrooms among other renovations. Sparrow missions also installed water coolers so the purified water would be both readily available and cool. 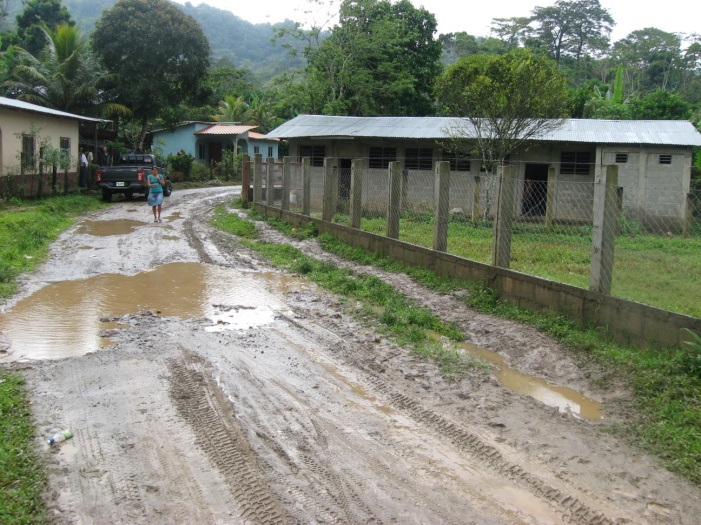 In addition to our experience at Las Casita’s orphanage we have gone on to perform two additional installations in two small mountain villages.  Both villages are about 40 minutes from a city with paved streets and neither village has electricity.  Since the Waters for the Living Lord system does not require electricity the systems were perfect for them.  Both villages had cisterns which collect water during the rainy seasons and the water is piped to the village where the elevation of the cisterns provides the pressure necessary to operate the systems.  We performed the “survey” at the village of Rio Blanco during the rainy season.  The mud was 4 inches deep in places.  The kind of mud that takes your sneakers off.  The people were very enthusiastic and they quickly began selling water to 80 percent of the village. 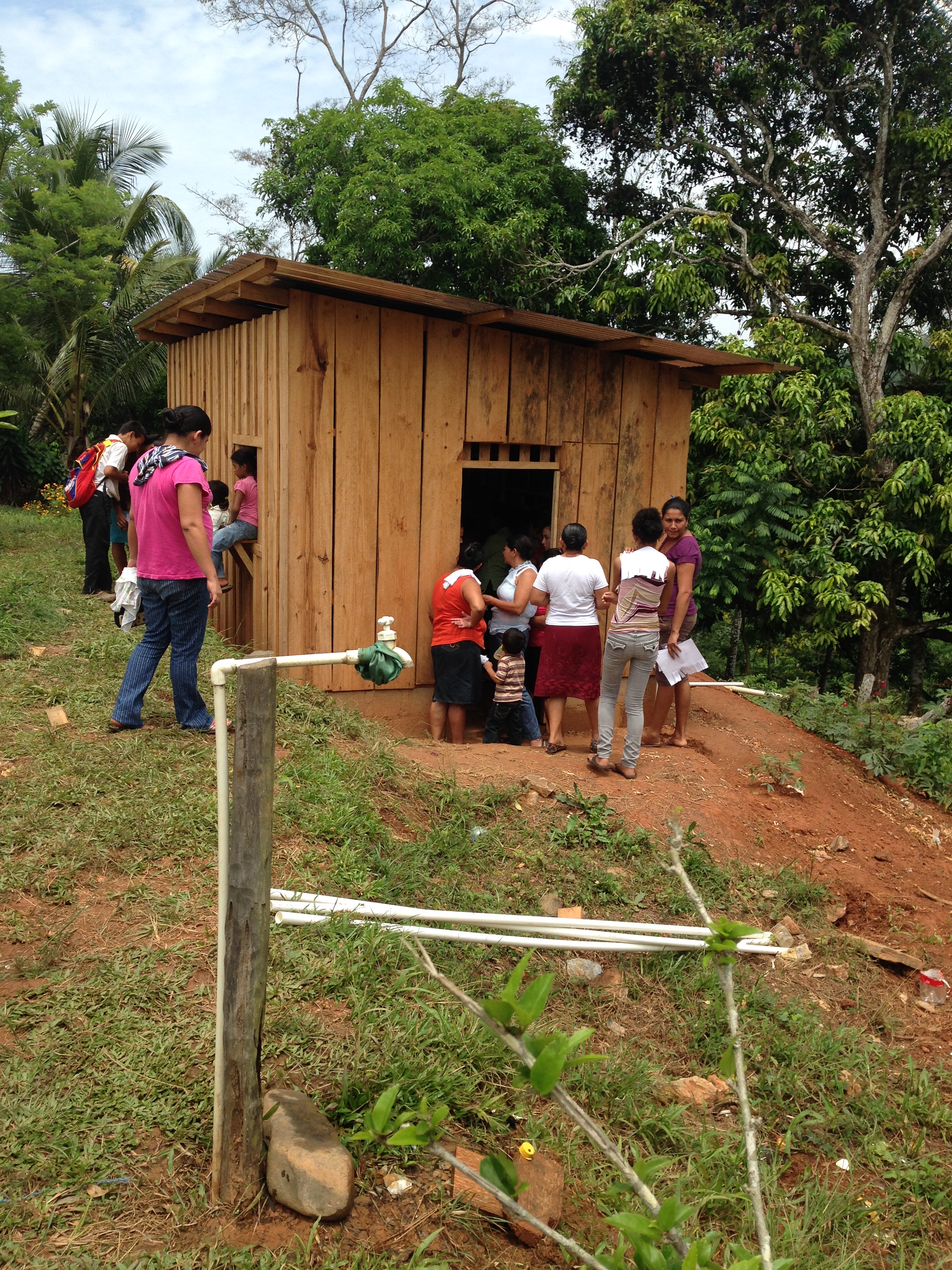 Next came Montanita.  This is a picture of the water building with one of the old water supply valves in the foreground.  When we arrived we were told that the entire village was sick with diarrhea and stomach problems.  They had just ended the dry season and the water had become contaminated.  We finished the installation and training in 12 hours and within two weeks 60 percent of the people in the village were using purified water.

We teach 4 uses of purified water:

Caring for babies and

The villages charge approximately $.25 for a 5 gallon bottle of water and the expectation is that each person will use 1 gallon of purified water per day.

Many people from our church have actively participated in the work of this mission.  These people include Mark and Stacy James, David Coleman, Dot Kirkpatrick, Ron and Helen Martin, Norris MacKinnon, Paul Adams, David Glass, Allison Underwood, Ralph Thompson, David Jett and Don Dickson.  We have also been blessed to have active help from many, many people who are not members of our church.

In 2019 our church decided to stop installing new water purification systems.  While we still had financial support from the church we ran out of people from our congregation that were willing to travel to Honduras to do all of the work necessary to sustain the ministry.

During our many years in Honduras we worked with many very capable people who developed the same passion that brought us to the country.  In 2020 a group of those people consisting of Father Hector Madrid, our spiritual and logistical guide for many years, Chon Guiterrrez, and Manual Mena returned a water purification system that had developed problems to service. They replaced 4 filters that we shipped to them in Honduras and completed all of the work on there own,  They did an excellent job and demonstrated that the had the knowledge and experience to continue the mission.  We also agreed to budget ongoing financial support to Father Hector to provide him the resources to monitor and support the other 12 systems that we have installed.
﻿
Since we had to discontinue our travels to Honduras in 2019 we have been blessed to be able to continue our mission. With the excellent help of Ermin Varela, and other of the people we worked with over the years we have been able to continue or mission. Covid hit Honduras very hard in 2020. Most travel, both in and out, was restricted. Ermin continued to provide technical help to an orphanage called Copprome which is north of his home in El Progresso. Through this work he became aware of new opportunities to provide help. Ermin learned that an orphanage called “Senderos Del Amor” located in San Pedro Sula had closed. With his help we had installed a system there in 2016. He asked for permission to un-install the equipment, which we readily agreed to, and he stored the equipment at his home for future use.
Early in 2021 we learned that a village called Rio Blanco had stopped using their water purification system and that Father Hector and Chon Guiterez went there and removed the equipment for future use. Ermin’s reputation was growing and he was contacted by an orphanage called “Rainbow Orphanage” for a potential new installation. We provide funds for him to visit the site, conduct a full “site review” to assure that both physical requirements and community support was present and ultimately the re-installed the Senderos Del Amor equipment to establish a new system.
Next came the village of Santa Crux . Upon learning of their need Ermin, with help of Manual Meno, recovered another system which had discontinued operation from a village called El Junco. Again with the help of Manual the re-installed the El Junco equipment there.
In late 2021 Ermin was approached by another village called Aqua Blanco for a system. Again he performed a site survey to be sure that the village and facility was adequate and he re-installed the equipment that had been recovered from Rio Blanco. We were contacted by “Sparrow Missions” a very successful mission group from central Kentucky to learn that their orphanage near Santiago called “The Children’s Home” was forced to close because of physical security threats. This was an orphanage that several of the members of our church
had visited. Before they abandoned the property they removed the water purification system. In 2022 Sparrow Missions subsequently purchased what had been the Sendeos Del Amor Orphanage. This was much closer to their base of operations in San Pedro Sula. They asked that we re- install the system that had been owned by the previous owners and Ermin did the installation. Ermin learned that the village of Santa Cruz had stopped using the system that he had installed. He told them that if they were not using the equipment that we would take it back and he made plans to do so. While he and a helper were removing the equipment a group of representatives from a school called “One Hope” arrived and begged him to provide a system for them. They provide practical training to older students like sewing, welding, electrical etc. Following a review of there site we agreed to re- install the water purification system there.
Later in 2022 Ermin was contacted by a village called Guacamaya. Following a site survey where he determined that the water was severely contaminated we are making arrangements to ship parts for a completely new system. Although personnel from our church have been unable to travel to Honduras to pursue our mission we have been blessed to have the very capable support of the many people we met there and we hope to continue to provide clean waters to others in Honduras in the future.

To see a quick video from the Sparrow Mission, click below. 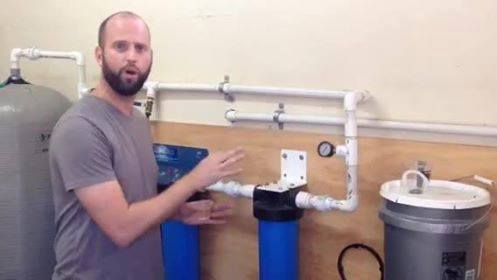