ADVENT:
THE END & THE BEGINNING 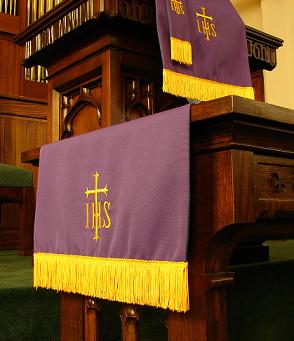 As a season, Advent is the late-comer to Church year.  Because the word “Advent” (from the Latin adventus) means “coming” or “arrival,” and because it precedes Christmastide, many Christians have misunderstood Advent to be exclusively a time to get ready to celebrate the coming of a child at Bethlehem.  But, the season of Advent is much broader in its significance.  It is not just about the “coming” of Christ’s nativity; Advent is also (and perhaps more so) about the “second coming” of Christ.  Advent is the celebration of the promise that Christ will bring an “end” to all which is contrary to the ways of God.  The resurrection of Jesus Christ is the first step of this end of the powers of death—the inauguration of what is yet to come in fullness.
Advent—as the beginning of the liturgical year in the life of the church—takes our thinking to the very end of things.  Here, the word “end” does not refer to the “end of time.”  Rather, it refers to the central “purpose” or “goal” of creation.  We are not aimlessly wandering in a wilderness.  Rather, history is headed somewhere by God’s direction.  It is necessary that the liturgical year begin with Advent—with the focus on a central, holy intention.  Without this focus, the story of Jesus (which is about to be rehearsed from conception and birth to death and resurrection) may seem less than what it is—the deliberate fulfilling of divine purpose, unfolding through the course of history.  Advent’s focus on the central purpose of God in history can keep the story of Jesus Christ from falling into irrelevance.
Advent reminds us that the sacred story of God in Christ—to be understood aright—has to be read backward.  Just as the birth and ministry of Jesus are meaningless until we know of the Lord’s death and resurrection, so too the whole of the past is muddled unless first we have a grasp on the nature of the future.  It is Advent’s focus on the “end,” as well as the “beginning,” which makes our worship a joyful anticipation as well as a hopeful reminiscence.
Advent began as a season of penitential preparation for the festival of Christmastide.  And, because the Lord’s Day (Sunday) is the primary feast day of Christianity, the penitential period of Advent was measured out from Christmas day in a number of Lord’s Days.  Originally, Advent was a season reaching back six Sundays from December 25.  Eventually, the length of the season settled out to four Sundays from Christmas day.  In truth, there does not seem to be any theologically documented reason for the length of Advent.
The liturgical color for the season of Advent is purple.  Purple represents penitence because it signifies the feeling of sorrow for our sins in the light of Christ's expected coming.  It is indeed proper and fitting for us to mark the season of Advent with the holy color of purple.

RETURN TO DAYS & SEASONS (When We Worship)