EASTERTIDE:
THE WEEK OF WEEKS 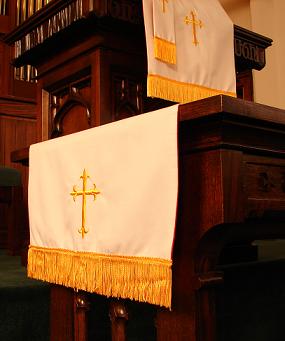 “Easter” is an unfortunate term because (apart from popular associations) it has no obvious Christian meaning.  It refers to “Eastre,” a Teutonic goddess of springtime and hence to fertility.  As a name, “Easter” fails to say anything about Jesus Christ and is possibly a remnant of a polytheistic nature cult.  Perhaps the best which can be said of the word “Easter” is that, by the power of the resurrection, Christ has fulfilled and displaced the longing for the life which the goddess of springtime once represented.
Easter day is a moveable feast day in that it does not fall on a fixed date in the Gregorian or Julian calendars (both of which follow the cycle of the sun and the seasons).  Instead, the date for Easter day is determined on a lunisolar calendar (as is the Hebrew Calendar).  The precise date of Easter day has at times been a matter for contention among early Christians.  At the First Council of Nicaea in 325 AD, it was decided that all Christians would celebrate Easter on the same day, which would be computed independently of any Jewish calculations to determine the date of Passover.  The rule for calculating Easter’s date is as follows: Easter Day is . . .

The result of such calculation is that, in Western Christianity (using the Gregorian calendar), Easter day always falls on a Sunday between March 22 and April 25 inclusively.
That “Eastertide”—the season of Easter—consists of forty-nine days is no accident.  The number seven was highly revered among Jews and early Christians.  Among other meanings, seven connoted fullness or completion.  This number became enshrined in the time period known as the “week.”  But, if seven was a good number, how much better must be seven sevens (forty-nine). Thus, a forty-nine-day period of time was a “week of weeks.”
This season of forty-nine days is strangely close to being one-seventh of a year. So, just as the Lord’s Day (Sunday) is one-seventh of a week and is set aside as a holy day, so also Eastertide is one-seventh of the Church Year and is set aside as a holy season—a kind of “Lord’s Day” for the liturgical year.
The liturgical color for the season of Eastertide is white.  White represents the holiest of days in the life of the Church because it signifies the glory of our resurrected Lord, Jesus Christ.  White symbolizes purity, holiness, and virtue, as well as respect and reverence.  White is used for all high Holy Days and festival days of the Church year.  It is indeed proper and fitting for us to mark the season of Eastertide with the holy color of white.

RETURN TO DAYS & SEASONS (When We Worship)